In keeping with the tradition of celebrating all important festivals and days in the school and introducing the children to rich cultural heritage of the nation, DPS Jammu celebrated Baisakhi and Ambedkar Jayanti with great fervor and enthusiasm by organizing a special assembly in the school premises here today .
The children folded their hands in the prayers offered by Ayukta Koul (VIII-J), which was followed by scintillating dance performance on traditional Punjabi folk song by the primary wing children, while the school choir dressed in traditional costumes, rendered ebullient group song on Baisakhi . The children were also explained about the importance of Baisakhi and Ambedkar Jayanti by the comperes -Kritika Sharma (IX- A) & Ayush Pargal (X-G) along with Savya Sehgal (VIII-F) . Earlier, the thought of the day and pledge were delivered by Jivantika Chalotra (VII-J) and Stavya Khajuria (VIII-E) respectively .
The Principal DPS, Jammu -Ms. Ruchi Chabra in her address said that Baisakhi is not only a special harvest festival of Punjab, but it is also celebrated as a day marking the new year, foundation of Khalsa Panth and Arya Samaj . She urged students to take inspiration from humility and gratitude expressed for different elements of nature and festivity which mark this occasion . She also remembered the father of Indian Constitution, Dr. Bhim Rao Ambedkar.
The Headmistress, Ms. Meenu Gupta also spoke on the occasion , reminding the children to perform their duties towards nation responsibly . She also highlighted the importance of Baisakhi.
The vote of thanks was given by Mr. Mandeep Singh House Warden- Chenab House. The assembly concluded with the rendition of the National Anthem in unison.
Hon'ble President, RCT, Sh. M.K. Ajatshatru Singh Ji, Hon'ble Pro-Vice Chairperson DPS Jammu, Kunwrani Ritu Singh Ji and Hon'ble Director DPS Jammu, Sh. S. S. Sodhi Ji also extended their warm wishes to staff, Students and their parents on the occasion. 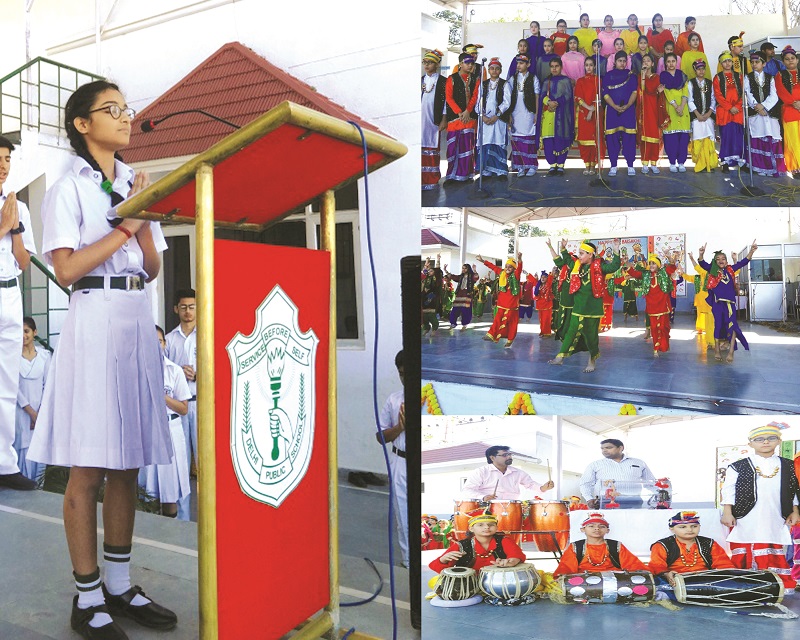